Good Morning, Musicologists! We’re back in retail hell for the day, but we’ve got great music on tap, including music from New Orleans and a special airing of Valerie Carter’s The Lost Tapes later.

This is a special back-to-back airing of some great “found” music from the late, great Valerie Carter. Not only was she a solo artist in her own right, but she was a highly sought-after addition to projects from artists like Linda Ronstadt, Jackson Browne and others. I will never forget her appearance as the opening act for Ronstadt’s concert at the Orpheum in Boston, and the two of them singing on stage together. One of my fondest musical memories.

Tune us in, people. You don’t hear this shit anywhere else, and you certainly don’t hear it for free 24/7. Before, after and in between our modest programming hours, we bring you great Open Stream around the clock.

Good Morning, Music Lovers! Well, here we are in New England. Yesterday it was 51 degrees and sunny. Today, it’s about 30 degrees colder and snowing. But it’s nice and warm here in The Mermaid Lounge and we’ve got some great programming on tap.

This is the first solo album by Gregg Allman, the leader, songwriter and main vocalist of the venerated Allman Brothers Band. In fact, he worked on his debut album while working simultaneously on the Allman’s Brothers And Sisters album. It was released on Capricorn Records in October of 1973. The album resulted in two singles, Midnight Rider and Don’t Mess Up A Good Thing. Midnight Rider was also covered by the Allman Brothers Band, but Gregg Allman’s version remains my favorite.

Saving this great playlist for Mardi Gras week is a thing of the past. It should be played more frequently than once a year. Not only will you hear music that is central to the culture of New Orleans, but you’ll hear from some mainstream artists who were born in New Orleans. You’ll hear the music of The Preservation Hall Jazz Band, Clifton Chenier, Lucinda Williams, Allen Toussaint, Dr. John, The Neville Brothers, Tony Joe White, Professor Longhair, Fats Domino, Irma Thomas. Allen Fontenot, Aaron Neville, Chance Bushman, The Daywalkers, The Boogaloo Swamis, Kermit Ruffins, Jerry Lee Lewis, The Magnolia Sisters, The Meters, Queen Ida and The Bon Temps, Boozoo Chavis, and more!

Get on the train, people. It’s about to pull out of the station and you don’t want to get left behind. We’ve got our usual worldwide weekend music lovers tuned in and it’s about time you joined them. It won’t cost you a penny. No lie here. We’re totally free, accept no advertising, and don’t spent a hell of a lot of time talking. We play music.

Here we are again hanging out in The Mermaid Lounge cramming in my musical duties before an opening shift. I hope you are soaking all this knowledge in like a sponge.

Here’s your lesson for Wednesday:

January 6, 1957: Elvis Presley makes his third and final appearance on the Ed Sullivan Show, where he sings seven songs, including Hound Dog, Don’t Be Cruel, and Heartbreak Hotel. Of course, they only show Elvis the Pelvis from the waist up.

January 6, 1958: Great Balls of Fire by Jerry Lee Lewis hits #2 where it will remain for four weeks before dropping down. What’s keeping it from #1? At The Hop by Danny & The Juniors. (Are you fucking kidding me?)

January 6, 1964: The Rolling Stones headlined their first UK tour, with The Ronettes as the opening act.

January 6, 1966: The Beatles’ We Can Work It Out is awarded a Gold record, two days before it begins a three-week stay at #1.

January 6, 1973: Carly Simon hits #1 with You’re So Vain, and people continue to obsess to this day trying to figure out for whom the song is written. Carly’s conflicting answers shed no light on this mystery.

January 6, 1993: Rolling Stones bass player Bill Wyman leaves the group after 30 years because he didn’t see anything new coming on the horizon.

January 6, 2007: “Sneaky Pete” Kleinow, one of the finest pedal steel guitarists ever who played with The Flying Burrito Brothers, died in Petaluma, California, of complications from Alzheimers.

January 6, 1947: Sandy Denny was born in London. She would become the lead singer of Fairport Convention, and the only guest singer on a Led Zeppelin song, The Battle of Evermore.

And that, my friends, is it from the College of Rock n’ Roll Knowledge.

Good Morning, Music Trivialists! We here at the College of Rock n’ Roll Knowledge draw from our own archive of totally useless information and pour over various electronic sources to bring this to you every day. As you may expect, some sites differ from others about locations of events, timing, etc. Needless to say, research, critical thinking and weed is required to complete this task.

December 4, 1956: Elvis Presley stopped by Sun Studios unexpectedly to find Jerry Lee Lewis and Johnny Cash watching Carl Perkins in the studio. The four would tape several songs together on that day, but it would be 25 years before that day would be immortalized on vinyl as The Million Dollar Quartet.

December 4, 1964: The Beatles release their fourth album, Beatles For Sale, which spends 11 weeks as the #1 album in the UK.

December 4, 1971: Don MacLean’s eight-minute epic, American Pie, enters Billboard’s Hot 100. Before all is said and done, it will sell 3 million copies. To this day, it remains one of the most analyzed and debated songs in music history.

Also on this day, Sly & The Family Stone’s Family Affair begins a three-week run at #1 on the Billboard Hot 100. This will be their third and final #1 and their last song in the top 10 before the band implodes under the weight of personal issues, and falls apart. Too bad. They were a great band.

Led Zeppelin also began a two-week stint at the top of the UK Album chart with the Four Symbols album, which includes Stairway To Heaven. The album will eventually sell 11 million copies and remained on the US charts for nearly five years.

December 4, 1980: Jimmy Page, Robert Plant, and John Paul Jones announce that Led Zeppelin will not continue on after the death of drummer John Bonham.

December 4, 1982: A retrospective album of John Lennon’s solo work called The John Lennon Collection, started a six-week run at #1 on he UK Album chart. The front and back covers were shot by Annie Liebovitz on December 8, 1980, just five hours before John Lennon’s murder.

December 4, 1942: Chris Hillman, of The Byrds, The Flying Burrito Brothers, and the Desert Rose Band, was born in Los Angeles.

December 4, 1944: Dennis Wilson of The Beach Boys was born in Inglewood, California.

And that, my friends, is as they say — all the news that’s fit to print because there are a lot of singers we simply don’t give a shit about here in The Mermaid Lounge.

Good Morning, Music Lovers Across the Globe! We’re trying to liven up your day beyond just playing great music! Today we’re starting the College of Rock n’ Roll Knowledge. There’s no tuition, and I am your professor, just as I am your programmer, researcher, music director, blog writer, and all-around music lover.

November 12, 1955: Fats Domino sits atop the R & B charts for the third week with his hit All By Myself.

November 12, 1957: Johnny Cash records Ballad of a Teenage Queen at Sun Studios in Memphis. The song will go to #1 on the Billboard Country charts in February of 1958.

November 12, 1962: The Beatles appeared at the Star Club in Hamburg, Germany, sharing the bill with none other than Little Richard.

November 12, 1965: The Velvet Underground makes its debut when it performs live at Summit High School in New Jersey. Fun fact: The band took its name from a paperback book about a secret sexual subculture in the early sixties.

November 12, 1966: Donovan’s Mellow Yellow is released. The song will go to #8 on the UK charts and to #2 in the U.S. It was originally believed that the song was about smoking banana leaves, which was rumored to be hallucinogenic. (Trust me. We tried it. It isn’t.) Later, Donovan would say that it was written about his bout with jaundice in 1966. I prefer the banana leaves story.

November 12, 1967: Jerry Lee Lewis records To Make Love Sweeter For You, which tops the Country charts in the U.S.

Thanks for joining in today. We hope you’ll join us every day here on the blog. You have no idea what you’re missing until you pay us a visit! 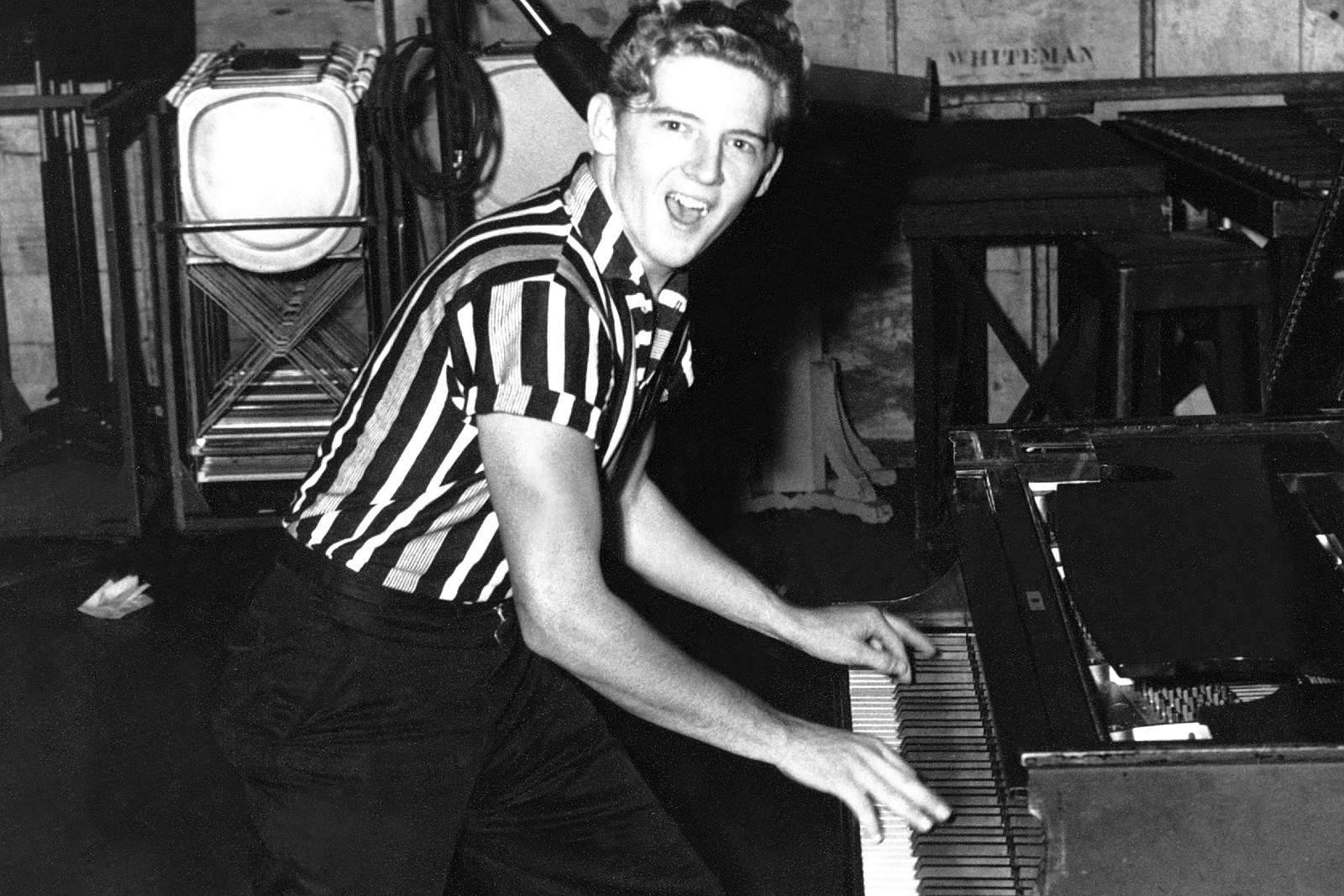 Here’s your programming for today:

Marsalis, born in New Orleans in 1961, joins Eric Clapton on stage at the Lincoln Center for some blues.

Tune in. Turn on. Drop out. It beats voting.